skip to main | skip to sidebar

Upon looking at this aethernet journal, I realize that I have been rather remiss in my postings.

There have been many things going on and thus I have been distracted. I do promise that I shall begin posting again soon once things have settled a bit.
Posted by Eladrienne Laval at 2:14 PM 2 comments:

It is always sad to hear of a major Steamlands region closing and the community of Victoriana will be doing so at the end of the month. Mayor LittleBlackDuck Lindsay cited many reasons, first and foremost being his frustration with Linden Labs and many of their recent policies, oversights and inaction. I do feel for Victoriana's residents, as one does become vested in their community and I am sorry to hear of this happening.

For more information, you may peruse the following aethernet journals:
The Heliograph
Hibernia on the Skids
Through the Filter of a Victorian Aesthetic
Posted by Eladrienne Laval at 1:59 PM 2 comments:

Lunar asked me about using my museum building for the new embassy in Winterfell Absinthe. With a few tweaks involving some wall removals, a new back doorway and a retexture, I placed it in a nice little spot next to the Hut des Jagers... 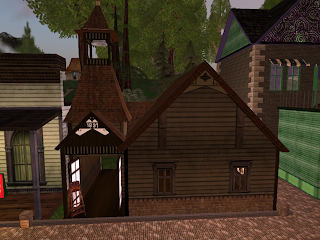 I created a wallpaper texture based upon a William Morris design... 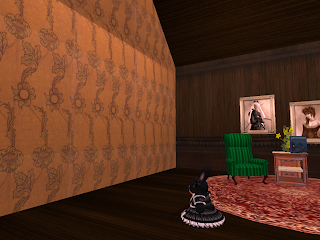 And in the back, Lunar created a bit of Pacific Northwest woodlands for folks to enjoy. He is still in the process of moving welcome items and finishing its details, but do feel free to stop by and enjoy this piece of Steelhead! 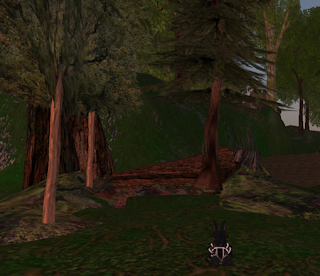 Being a bunny builder is hard work... 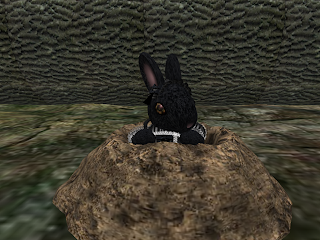 As I have been away for reasons explained in this post, I thought the easiest way to catch up on the unusual things that happen at Steelhead town meetings was to show you the photos themselves. It seems the town hall chandeliers are infested with crows and chickens... 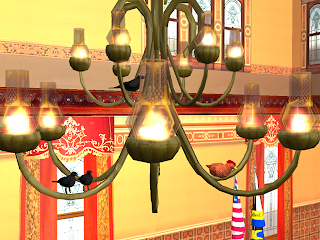 Was it something Fuzz said? Pies were being thrown left and right by attendees... 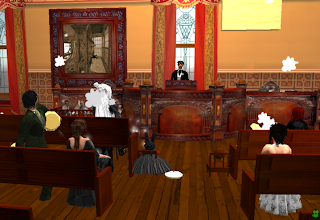 After one meeting there was a hair-raising airship ride through all of Steelhead's sims with Emperor SteelCobra that involved being underwater and landing on pagodas... 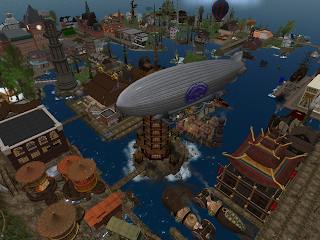 And speaking of the blue gent himself, he seemed rather ready for St. Patrick's Day... 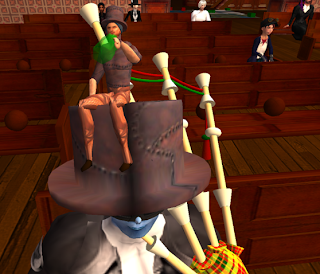 Latest Issue of The Primgraph is Available 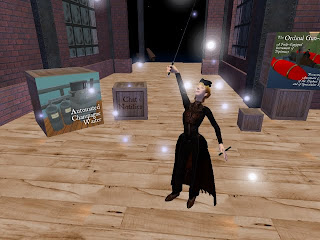 I have been reading about the situation regarding Ordinal Malaprop's departure from the Grid with both sadness and interest. Mainly because as of late, I have often felt the same way.

Her concerns about the recent LiLa acquisition of Avatars United aside, I can understand the sense of logging in and feeling as if you are unproductive as a creator. Or unwilling to deal with whatever the latest drama the Grid or its citizens throw your way. I know that for me, logging into SL lately has been bringing more apprehension than enjoyment and I have always said that when it gets that way, why bother?

I used to love being inworld and creating and blogging. I used to love attending social events and exploring the Grid. I've gotten so tired of hearing about other people's dramas as they rant/complain/gripe their way through their time inworld. Why are you even in SL if it all sucks that much for you? That, combined with my own lack of motivation to create, has been a great source of inworld stress for me and you know what? I've been doing other things instead. I'm sure that it'll kick in and I'll be creative again. At least I hope so. Dia and I have talked a lot about "reclaiming one's SL", whether through downsizing, reinvention or taking a break from it (as I have been lately) to make it fun again. We can't be the only ones that have felt this sense of ennui.

As for Dame Ordinal, she's quite the inventor, scripter and personality. I took the pic above when we both got stuck at her shop in Caledon about 2 years ago. I was so excited to meet her for the first time. We had a great conversation and she demonstrated her latest product for me. Her presence--especially in the Steamlands of SL--will be missed.
Posted by Eladrienne Laval at 4:13 PM 4 comments: 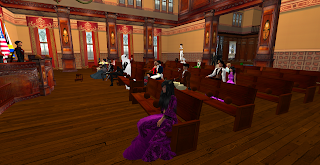 The citizens of Steelhead gathered for their weekly town meeting. We are having a lantern festival on the 15th, and there is a call for folks to create their own. You can find out more about it here. And poor Mrs. P was Steelhead's first afk chickening of the year... 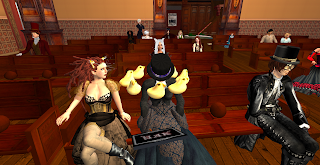 View my complete profile
You may find me in my Caledon Regency shop or home in the 19th c sim of Steelhead. I'm given to reckless gallops across the nation, handling the occasional weapon and "water of life", swooning at the handsome gents, and kicking my heels up at soirees. And adventure...always adventure! All done in a beautiful dress... 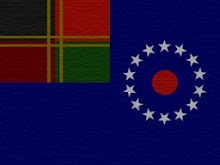 Shop E.Laval on the Aethernet!

Visit E.Laval via the aethernet at XStreet SL!

Find out about new releases and more at the E.Laval Fine Clothing blog!

This is a Flickr badge showing public photos from eladrienne tagged with Caledon. Make your own badge here.


View my page on Steelhead


View my page on New Babbage

Second Life® and Linden Lab™ are trademarks or registered trademarks of Linden Research, Inc. No infringement is intended.